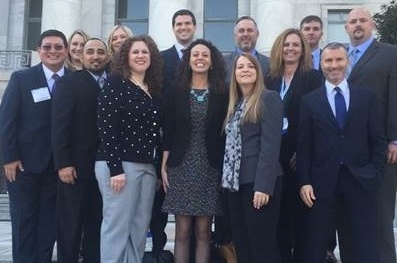 Kim Robb, Director of Property Management for Continental Properties recently visited Washington DC for the National Apartment Associations (NAA) annual advocacy day. This was a first for Kim, who accompanied a group from the San Antonio Apartment Association (SAAA), to which she was recently sworn in as a board member.

The NAA Capital Conference is an annual event during which professionals in the apartment industry gather in our nation’s capital to network, attend conferences, and, most importantly, meet with members of congress to discuss issues important to our industry.

Kim recounts her first experience in working the venerable halls of congress, “We were advocating reforms in three areas that have major impacts on how we operate our apartments: the Americans with Disabilities Act (ADA), the National Flood Insurance Program (NFIP) and Housing Opportunity through Modernization (Section 8). Under the current ADA regulations, owners can be sued and forced to pay on claims before they are even given the opportunity to fix a problem. The flood insurance reforms we were advocating would allow for more affordable options for property managers. The Section 8 reform was unanimously passed in the House of Representatives last year but still needs to get through the Senate.”

In her short time as a member of the Board of Directors of the SAAA, Kim’s leadership skills have already become evident to her peers. Although Section 8 reform does not directly pertain to Continental, Kim was asked by her lobbying group to speak on their behalf during their many meetings with congressional staffers.

Thank you, Kim, for representing Continental and our industry so well!